Gondala (cable) lift or cable car in Gothenburg by 2021

An aerial cable-car will be up and moving in Gothenburg as it celebrates 400th anniversary in 2021. The aerial mode of transport will evoke an alpine mode of transport in the quadricentennial city. It shall be a new silhouette and icon to the existing ones.

Jonas Attenius from Gothenburg City Council (kommunstyrelsen) says the linbana (cable car) is a new way to cross over to the other side of Göta River to Hisingen, and hopes it will be ready in time for the jubilee celebrations. He says the local government decided to build the gondola cars instead of a building another bridge or a tunnel.

The cableway will connect Järntorget-Lindholmen-Wiesel border site. The permission for the construction of the cable car was granted in 2016 by the Gothenburg City Councilwith the aim of opening traffic for the summer of 2021.

The local officials reckon Gothenburgers will ‘feel proud and happy that people have come closer to each other in the city’.

There will be a gondola from Järntorget one in every 45 seconds and it takes just a few minutes to cross Göta River in over 4 minutes.

The local government assessed that the cableway is environmental-friendly, noiseless, safer, and reliable. Because Gothenburg is a windy city, the cable-car could be shut down when the winds turn heavy. It was assessed that the cable-cars are safer than bus / tram and 50 times safer than car. Cable cars are both reliable and weather resistant. Of course, in the case of very hard winds, you must turn off, but this also applies to traffic on the river.

A cable car across the river not only connects the city, but Gothenburg would also be understood in Sweden by integrating a cable car as part of ordinary public transport.

The project is still in a political decision-making phase. The exact distance and locations of the different stations are determined in the detailed planning process.

The goal is a denser city center where it is closer to people and opportunities. But it is far between the bridges in Gothenburg. And before the new Hisingsbron is in place, it’s only the ferries that offer a transition adapted to all Gothenburgs who arrive without a car. But soon there may be a change. Just between the bridges, a new and elegant way to cross the river cableway is planned.

The mainstation will be at Järntorget. Since the gondolas are going to sail over the rooftops, you can take the elevator up. (The station itself will be on the 2nd floor in the hotel to be built right at the people’s house – folkshuset). It does not matter if you miss a gondola, every 45 seconds comes a new one. The first stop is Lindholmen. Your journey does not take more than 4.5 minutes. If you decide to stay on board, you will arrive at Lundby Station after another 3.5 minutes. The entire journey to the Wiesel border station, therefore, takes less than 12 minutes.

This detailed plan is at an early stage and is expected to be issued for consultation in spring 2018 and should therefore be approved by 2019.The unique thing about the cable-car ways is one can carry one’s bicycles in the gondolas. For more information about the project, click here: linbanan. 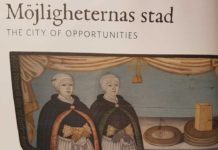 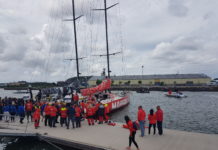