Stop, Mrs Gashi said in Swedish, just after the fourth lap of threading on her left cheek. It was only the beginning. Her face requires more than two dozen pulls with a thread to pluck out her almost invisible golden hairs on her pinkish complexion.

Still holding the thread in his hands, Ahmed stopped.

“Is this the way to treat a woman,” she stated in a tone as poignantly as a victim of war crimes.

Threading is a fairly painful form of removing facial hairs but its advantages also outweigh the pain, if one can endure the pain.

Mrs Gashi got up from the chair, and stood closer to the mirror, and her eyes turned moist the moment she noticed fresh boils of red spots where the thread from Ahmed’s hands had threaded the hairs. She cried. Inching to the customers’ area in the shop where roomy sofas are laid out, she repeated, “Is this the way to treat a woman,” but to another barber who was helpless as what to say to her statement.

Ahmed was startled, and shaken to see tears on Mrs Gashi’s face. He wondered how else one can do threading other than the standard practice. This was the first time he ever laid his hands on Mrs Gashi.

Ahmed the Iraqi Palestinian is establishing himself as a barber in Gothenburg. He has gained confidence in his vocation for he had studied the craft of haircut at Gothenburg’s Hairs College and he can speak and write in Swedish, fluently. No sooner he had completed his training as a barber, the New Age Hair Studio at Galileo’s Square in Bersjӧn, hired him. In less than three months, he started to have regular customers but never women and girls.

New Age Hair Studio is a barbershop for males but to make it holistic they also offered haircuts for women and girls assuming no one would come for only men worked here. The barbershop has a popularity for unbeatable prices for haircuts. Mothers brought their baby girls and boys, and occasionally some teenage girls with their mothers, and very rarely women.

All the six barbers in the studio were at work as Mrs Gashi sought an audience saving for Ahmed. This was the first time that a customer was dissatisfied with Ahmed, and on top of that, the customer was in tears.

Miss Gashi is a playful girl. She is used to see tears on her mother’s face at home. Seeing her mother still standing next to the roomy sofa, she came closer to her mother. The mother bent her body, and showed her face to the daughter. The daughter examined her mother’s face, and touched the left cheek, it felt normal to her.

Mohammed the manager of the day in the barbershop interfered, who had just finished with a customer, and he said to Mrs Gashi, “Don’t pay the money, you can go, or you sit, I will do threading, slowly, please.”

Ahmed stole a glance of Mrs Gashi. He felt sad for himself and herself, and regretted. Mrs Gashi is blessed with a baby face: she looked younger and younger as she grew older and older but when she opened her mouth, it was almost empty. She is losing her teeth. And she paid no attention to them for her priorities differed from fixing her teeth.

Mrs Gashi and Miss Gashi rushed out of the barbershop, and returned with Mr Gashi within fifteen minutes.

Mr Gashi is a faithful husband. He knows the ways of his wife, and he resigned to live with a woman he married.

The moment he entered into the barbershop, Mohammed the manager identified who he was but he did not reveal his acquaintance for Mr Gashi brimmed with anger: on his face and in his voice. He said curtly to the manager, “Is this the way you treat a woman who comes to your studio?” he commanded to the manager.

“Whatever you say,” manager replied.

Mrs Gashi sat in the barber’s chair now manned by the manager. She burped, “Please, slowly, slowly” while she dragged her skin down and down to give the barber a good grip on her cheek. The threading continued, and Mrs Gashi’s burping continued: ah, aaah, ahaha, ah, aaah, ahaha…

Mr Gashi stood stonily watching his wife and the barber, and Miss Gashi started to play with another customer’s daughter.

Ahmed began to work on the Afro hairs of another customer and stole a glance, when chance permitted while turning 180 degrees around the customer, at his colleague who was threading on Mrs Gashi. Mohammed was not touching the thread on her face but acted with his head and hands and issued out a sound:  Okay? Okay? Okay? Okay? Mrs Gashi burped, “You’re good. You’re good. …” 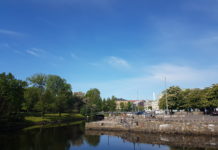