Nestle’s Maggi noodles is banned in many states of India because of high percentage of lead. Knowingly, or unknowingly, taking excess amount of lead leads to lead-poisoning.

Mahatma Gandhi led India to achieve political freedom with the weapon of non-violence, but we are not able to lead our lives in his path in post-Independent India. Are we?

Australians performable exceedingly well in cricket because the visionary captains lead the team unlike other teams often led by lame captains.

Lead has many meanings, and also functions as a noun, verb and forms compound words and as an adjective (the lead player, the lead author of the report).

As a noun, lead means a soft metal of dull greyish colour used in manufacturing of pipes, roofing material, as shield from radiation. Lead is mixed with other metals to form alloys. Lead is the thick stick of graphite used in pencils. Lead is used as a lump and fastened to a cord to measure depth of water beneath a ship. Leads is a plural noun meaning strops of lead used to cover a roof, leads are used to form a framework of windows such as a lattice window.

Leaded is an adjective.  Leaded means covered or framed or mixed with lead: leaded windows, leaded glass and others.

Leaden is an adjective meaning dull, heavy or slow. The development of roads and bridges taken place at a leaden pace!

Why are many museums leaden?

She had a leaden heart but she is striving to make it colourful: going for yoga.

Leading is a noun meaning the space between two lines of print (in printing).

Lead-poisoning (noun) is a disease by taking lead into the body beyond permissible limits.

Led is the past tense and past participle of lead (lead-led-led). Lead means giving guiding to others by leading in the front; the difference in distance between competitors in a race (she leads by ten metres, India is a leading cricketing nation), ‘the lead’ means first position (as of now), principal part in play or movie, piece of information (the reporter worked on a lead he got from a police source).

LED is an abbreviation for light-emitting diode. LED TV & HD (High Definition) are becoming popular because of picture quality.

Let us take a road that will lead us to a healthy living instead of taking the one that takes us to Rome or Delhi, and possibly where Maggi is not sold! 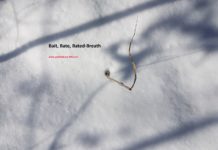