Miroslav Dronjak curses the weather as he enters into the library 300m2. He is in a state of rapidity over financial transactions. He has been cursing the weather in Gothenburg and he has been complaining about life in Sweden but he fails to realize the reality that he has willingly became one of the 10 million people in the country: Swedish citizen.

Spring has begun, officially, but everywhere there are only signs of winter: incessant drizzle, grey clouds, humans in blankets, and subdued sounds of life in animate creatures. The life on the streets rolls and rocks on in spite of wetness on the streets and glumness on the faces of walkers.

The garment stores are the only ones who proudly tweeted: spring clothes are in, please come in.

The moment Miroslav is inside the library he feels the warmth. The warmth of radiators seeps into his clothes, and he searches rapidly for a computer to use. He finds one without an occupant, and rushes towards it lest someone may occupy it.

300m2 welcomes disparate Gothenburgers whether in a state of desperation or in equilibrium.

A row of chairs in the 300m2 library overlooks a side street, and it is a floor to ceiling see-through glasswall. The row is lined with chairs with- and with-out computers. The glasswall offers a view of the inside for the passers-by and for the library-users a view of the passers-by: They can see each other without inhibition for the fleeting encounter is separated by the rigid glasswall.

Miroslav drops his bag next to his chair, and with effort he pulls out his library card from his wallet, and punches the login details, and looks out for his friend. Unless Zoran Nadoveza comes in, he cannot complete the online financial transactions: payments to make and payments to receive. He squirms in his chair, and fusses to wait but he has to wait.  The moment he takes his mobile phone to call Zoran Nadoveza, he arrives as he had promised, and takes his place in front of the computer.

Mirsolav makes Zoran to start the financial transactions, and engages with his phone to talk to the people concerning money matters. With the mobile phone to his right ear, he stands up and struts along the row of chairs as he talks. His voice echoes in 300m2.

If the entry door of 300m2was ajar, a Gothenburger at Central Station could have heard Miroslav’s voice.

A librarian notices him speaking loudly. She crosses his path, and says with unsmiling lips but with rage in her eyes, “Please keep silent.”

Miroslav hardly pays attention to her.

Freja Molin stands like a lamppost sans light. When he was about to walk past her, she fingers at him: ‘go out and talk’. He ignores the librarian thinking she is talking to herself or taking a break for her back for she could be wearied by sitting in front of her computer screen. But he stops by his friend who is handling the financial transaction on his behalf.

The librarian waits for him to walk past her. When he is about to walk past her, she stops him, and raises her voice with gestures, “Go out and talk.” He smiles at her, but continues to strut and talks to the mobile phone. When he comes back to where she stands, she repeats to make sure he understood for he spoke in a Slavic language but with dollops of Swedish.

He reacts to her, “No one is complaining, what is your problem?”

“This is a silent zone.”

“People come here to do things, pay bills, and they have to talk,” he says.

300m2 is indeed in pivotal point in the city. The City of Gothenburg strategically chose the spot for the benefit of residents in and around Gothenburg: hop in and drop a book, or pick up a CD or DVD, check your social media with free wifi, or pay your bills at the computer points, and off you go.

“It is written there,” Freja points, “to keep silence.”

“I will do that,” he says as he notices his friend getting up from the computer completing the transaction. And he adds to her, “You need to go and live in a forest.”

The librarian’s eyes twinkle at the sound of the word forest, and her fantasy to live in a forest and make a living by cultivating honey and milking cattle gains a speck of reality. She says, “Thank you.”

Freja walks to her workstation, and thinks about ‘why not a library in a forest for … summer … winter’. She begins to formulate her thought for an action. 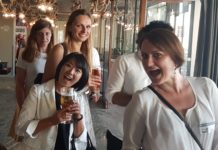 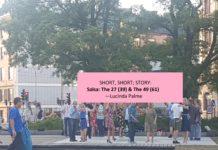