Stefan Nilsson and Emma Hendrickson escaped from their friends. They ejected out of ExCet Club but could not make out where to land for the evening. The evening was dark, and the night was far away and long, and would go on and on for it was winter. Their phones rang. They could guess their friends wanted to know – where are you? They did not check their phones but they looked at each other. They burped of laughter.

Holding their hands they walked briskly, and they came closer as they walked. Relief anointed their heads. And, they kissed.

Because it was transition time from late evening to early night, there were all types of people: pensioners sauntered, spinsters sprinted, parents pushed their prams, singletons hovered, bachelors jogged, and youngsters began crawling the streets in addition to a sprinkle of unseasonal tourists. Merrily lacing into each other’s arms, Stefan and Emma bisected through Avenyn and walked up to reach a side street.

Krishna Idukozi is a visiting scholar of profound accomplishments in the field of nanoscience. He aspired to gather as much experience as possible during his sojourn in the medieval city that is about to celebrate its four-hundredth birthday. He cherished his stay in Scandinavian city with the atypical Swedish twist.

Unlike in his countries of domicile, USA and India, Idukozi discovered the security of roaming the streets without the fear of being robbed and the relief of strolling in the city without the fear of being threatened or shot. Armed with the security and relief of being in Gothenburg, he began his stroll from a students’ hostel to Poseidon. Like many sojourners and tourists, he marvelled at the giant naked male sculpture holding a fish in his hand, he paused to take a photo with his smartphone but the ascending darkness forbid him and he told himself there was some more time to take photographs of the city before he left Sweden for good.

And, he began walking down Avenyn from Poseidon towards the riverside passing past the Gothenburg City Library and Hotel Park. Like many others, he stopped at the traffic signal where the trams took a turn towards Gothia Towers, and he admired the sense of responsibility among Gothenburgers: respecting the pedestrians; pedestrians respecting the motorists (and cyclists: he fancied to buy a bicycle but when he checked the price of a secondhand bicycle, he gaped and abandoned the idea, after he converted the Swedish krona to Indian rupees and American dollars.

Slowly, and safely, without hullaboo, he crossed the road and walked past Pressbyrån and the other stores that were shut saving for eateries and restaurants. Another side street streaked out of Avenyn without a traffic signal for it was almost pedestrianized. Raising his head, he took a step after step securely and safely.

Bang at a diagonal, he noticed Stefan Nilsson and Emma Hendrickson in a state of conviviality and cheerfulness in the world on their faces. Stefan and Idukozi grabbed each other’s attention: their eye contact was established beyond doubt. Unlocking his left arm from Emma, Stefan made a gesture with his two hands towards.

The gesture of Stefan caused a stir of excitement in Idukozi. He immediately caught the sight of Emma who was as radiant as an angel and as inviting as an apsara. With his gesture still in his hands, Stefan made few more steps towards Idukozi, and Idukozi inched towards Stefan.

With an angelic and apsaraic Emma in the company of Stefan, Idukozi did not waste time to respond to the gesture of Stefan. Idukozi shook his head in confirmation, yes, yes, yes, and the three came closer and closer.

“Sorry,” Stefan said, and walked past Idukozi with Emma. 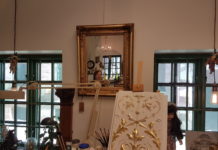 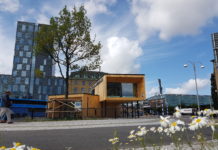