A two-day programme was held at the World Cultural Museum (Världskulturmuseet) in Gothenburg, 23-24 August 2019, with musical acts, discussions on the rights and status of the condition of queer and trans-people of colour, panel discussions surrounding the issues of LGBT-Q community, and exhibitions. What is Reclaim Pride? Reclaim Pride was to bring the LGBT-Q community to voice their concerns and also find ways to make companies and political parties to take advantage of their community by giving lip-sympathy and using their symbol: Rainbow.

One of the organisers of Reclaim Pride told www.gothenburg-400.com on the condition of anonymity why the ‘Reclaim Pride’ was organized. “The idea is to facilitate a space for LGBT-Q people that is free from political parties and corporations,” she said. At this two-day programme the organizers invited only those who ‘who are fighting for the community’. She said, “If you want a rainbow on your commercial during the Pride festival you are not invited. It is made by and for queer people.”

SWEDEN: Better for LGBT-Q community but

The organizer said that Sweden is a better country for the LGBT-Q community when compared to other countries in the world but there are trans-people who are still facing violence from the mainstream communities and the police, and how one can live depends upon whether one is white or rich or poor or of some other colour. She said, “You also have to realise that it is different if you are rich and white and belonging to the LGBTQ in Sweden and if you are poor and not white, it is different…such different standards are there.”

Love Hjertberg, one of the organisers of Reclaim Pride, told www.gothenburg-400.com that political parties and companies want to associate with Pride festival and LGBT-Q community to gain reputation by waving the rainbow flag and people buy their products and people vote for them. “I think they found a simple way to market themselves,” he said.

“They can use the rainbow symbol but they also have to fight for the rights and to defend what we stand for,” observed Love Hjertberg. 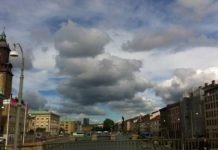