I stand at the tram stop of Central Station, I think: Should I greet her, or not? Is it a decent behaviour or an indecent attitude to greet a person of one-day-light acquaintance? If I greet is it an invasion of a person’s privacy in public space? Or, is it an acceptable rule to ignore? The questions arise in my mind as I studiously stand waiting for the tram to arrive.

Less than a minute later, I feel, she turns her head slowly and slightly in my direction. I turn my head slowly and slightly in her direction. Our eyes acknowledge each other. Gently a smile rises on our lips. Both of us have kept our lips in a shade of pink that is aimed to dispel the vulgar attention of onlookers but to draw the attention of a gentle admirer. She asks non-confidently, ‘Amanda?’ She remembered my name probably my name is not a typical Swedish name. ‘Yes,’ I answer, and say diffidently, ‘you’re Leida Kolossova.’

‘I had to write all your names.’

‘It is the policy of consulate. When we go on tours out of town we have to list the people.’

‘We’re all monitored by the men or big brother or Google,’ Leida says in a matter of fact tone but I think it is a statement with a political overtone.

‘How is your boyfriend,’ I ask out of interest in her with a wish that she would have found her desired man.

‘What?’ Ledia almost shouts drawing the attention of others in the waiting area. ‘He is not my boyfriend.’

‘What?’ I shout for I’m almost shocked at her revelation because seeing is believing. Here Leida introduces me to seeing is also disbelieving or unbelieving.

Every country celebrates one or the other occasion in one or the other way. Russia celebrates Victory Day of its earlier avatar USSR either in a low-key manner or on a grand scale or lets others to do it depending upon the political necessity. Because it was the year the Russian President Vladimir Putin got re-elected and Russia hosted football for the first time in 21st century, in the first weekend of May, the Russian consulate in Gothenburg collected a dozen people in Gothenburg to take them to Stockholm and bring them back.

During the drive from Gothenburg to Stockholm and back, among the dozen people in the white van were Leida Kolossova and Destrie Du-Vignau. They were in the company of others when they did not had a choice but when they had they huddled together in one of the seats and spoke non-stop and performing physical intimacies. Whenever I noticed them in the mirror for the middle-rear-view mirror invariably I caught their attention. On our way back from Stockholm, most of them dozed off in the van except for Destrie and Leida who sat in the front row of the passenger seats. Destrie’s hands were all Leida’s body, I could see his hands over her back and breasts and bum. If only there was darkness they would have copulated as well. I wished the intensity of physical intimacy may drive them to legitimize their relationship or continue it in some way. That evening, I dropped all the attendees all over Gothenburg for it was late in the day including Leida and Destrie at Gothia Towers and went on my way hoping I would never see them again.

Leida smiles, nudges closer to me, and hisses, ‘I think you saw us, ah?’

‘We have been dating off and on since we met in France. That week he was crying to come with me. I let him to come for the free ride.’

‘Sorry, I believed you were lovers.’

‘Everyone sees, you know, the youngest girl in that trip was also asking about you to her mother.’

‘We’re a bit extreme. I should not have let that French nerd to be all over me. People believed were going to get married or have kids and all that. He wants time, time for the last six years,’ she says angrily, and wants to continue.’

‘Are you taking six?’

‘Let us go together,’ Leida says.

We sit next to one another in the tram, and trundle in the tram towards our destinations with the chatter related to that day and about our lives. 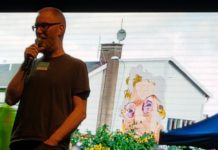