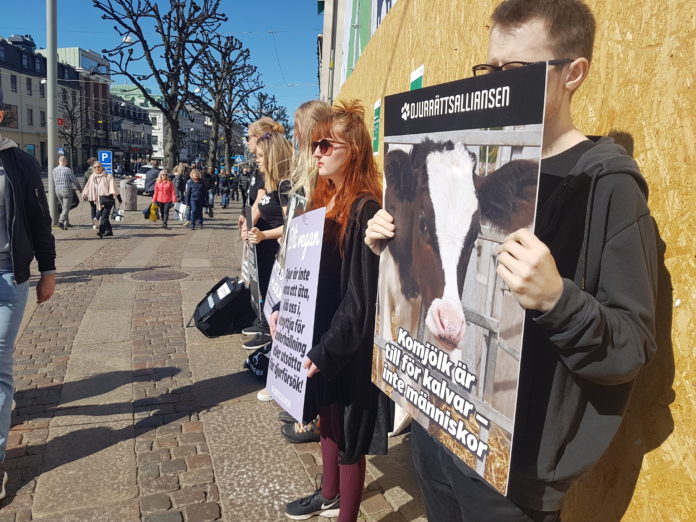 Gothenburg (Göteborg): Many things happen in few weeks: few things happen in many weeks, but some things are recurring. Animal Rights’ Activists in Gothenburg regularly protest (stand-ins) in order to spread awareness about the mistreatment of mother cows by the milk industry, and how their calves are taken away from their mothers, what happens to bull calves’ lives and for the rights of animals that are abused by the respective industries.

The activists of Animal Rights Alliance (Djurrättsalliansen) stage stand-ins against the abuse of animals especially the cows at different parts of Gothenburg in different ways on a weekly basis or twice in week, and continuously on online. “Most of the people in Gothenburg have seen us at some point,” says Emelie Iacobi an animal rights’ activist from Djurrättsalliansen.

Is everyone pleased about their consistent awareness campaign for the rights of animals? Emelie informs that the reaction from people is mixed: happy, annoyed, and wants to know about what we are doing. She says some people are interested, ask questions, get interested and it is like an eye-opener for them. Few people are angry especially those who work in milk industry and slaughter houses but she clarifies that their campaign is not against any individual but it is a campaign to spread awareness and to stop misusing and abusing animals such as mother cows.

The activists tell the passers-by by giving brochures, just stand in silence, and can also draw their attention with their placards: ‘Cow’s Milk is Not Your Milk’. They urge people to become a vegan: ‘Animals are not ours to eat, not to dress with their skins, not to make use of them in entertainment, and to not to use them for animal testing.’

Emeli Iacobi’s concern is – people who drink milk do not know where the milk comes from, how cows are treated, and people do not know that mammals have to get pregnant to give milk. She explains, “People have to understand that the cows do not get pregnant in a natural way. They are locked inside (enclosures) all their lives. Arms (of people) are shoved inside their private parts to impregnate (artificial insemination of cows) so they become mothers and give milk. When the cows become mothers, and give birth to calves, if the calf is a male (bull) it will go to a slaughter house and if the calf is a female she will have the same fate as its mother cow.”

“I want people for example to stop drinking milk, stop eating eggs and become vegan,” Emeli says. But how is it possible especially to raise children or from not consuming milk products? Emelie answers, “If I have a child I will give vegan food but when the baby is old enough I will give vegan substitute. When young enough not to eat food I will breastfeed the baby. You don’t have to take someone else’s milk… Your own mother’s breastfeed is okay but not from another mother’s milk…”

People are classified as vegetarians, vegans and non-vegetarians. And few are extremely sensitive to animals such as cows, and they are not silent but wants to spread awareness – cows too have feelings like mothers for their babies. 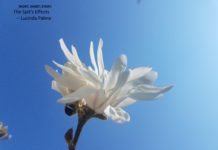