Hundreds of Gothenburgers participated in the Midsummer celebrations at Trädgårdsföreningen in central Gothenburg aka Göteborg.

The organizers of the festival made sure all the visitors got the flowers and leaves to make the maypole and wreaths. The best part of the celebrations were people’s participation in making the maypole and adorning themselves, adults and kids, men and women, in wreaths – kransar (en krans – kransen – kransar: a wreath – the wreath – wreaths).

Maypole is a pole (of wood or iron) decorated with leaves and flowers and the primary symbol of Midsummer celebrations. Its symbolism is debated but its origins are attributed to Germanic tradition, paganism and reverence for trees among others.

Carola Lindblom the moderator of the celebrations gave minute to minute advice, instructions and the reasons for celebrating Midsummer both in Swedish and English. She said Midsummer is the time to decorate one’s house, and the festival has German origins starting as early as 16th century and it became the most traditional of all Swedish festivals both in rural, urban and industrial societies. The festival symbolised magical time of the year across Sweden: summer.

Zara Blidevik from Trädgårdsföreningen told www.gothenburg-400.com that there are midsummer celebrations all over Gothenburg, like elsewhere in Sweden, but the uniqueness of the celebrations at Trädgårdföreningen is the association of people with the Midsummer festival organized by the Garden Society and the way it is celebrated. Brita Sivertsson has been associated with the Midsummer celebrations since its start 28 years ago in the park, and Carola Lindblom is coming here year after year for more than 15 years. She said, “We have the same people, they come here, they bring all this joy and happiness and they still want to celebrate the midsummer here. So, I think that’s the reason why we have so many visitors, and we are doing so well. It is amazing. People wants to be here, again and again.”

The park opened its gates at 11, and the preparations for maypole (midsommarstången kläs) began followed by music and dance performed by Folkdanslag dansar – Göteborgs
Nationaldanssällskap.

Trädgårdsföreningen or the Garden Society of Gothenburg is the 19th century park in the centre of Gothenburg with entries on two sides. It attracts people day after day because of its location as the verdant spot, a place for relaxation and inspiration provided by the canal and the artworks, the undulating lawns, the trees and flower beds, native and exotic flora, patches of woodlands, the palm house and the rose garden. 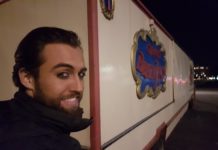 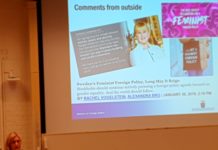