Gothenburg aka Göteborg the 400-year-old city is gearing up to celebrate its quadricentennial birthday in 2021. There are many things to do, to see, to feel, and one of them is Drömmarnas Kaj. Only a seasoned Gothenburger knows about this place.

Drömmarnas Kaj is a strip of land along the River Göta starting from Lilla Bommen the harbour or dockside of Gothenburg.

Lilla Bommen is also the name of a tall modern 22-storied building (86 m or 282 ft) also called Lipstick Tower. Because of the look of the building it is referred as variously as Lipstick (Läppstiftet), Skanska Skyscraper (Skanskaskrapan: there are few skyscrapers in the city), Water Level Tower (or Water Erection Jet: Vattenståndet – a double-entendre) and the Lego House (Legohuset).

You walk from Lila Bommen, and pass through the underside of a bridge named Göta Älv Bron. Built during 1937-1939, Göta Älv Bron connects Hisingen with the central Gothenrburg. The bascule bridge carries tram and vehicular traffic, but was widened in 1966 for cycle track and to give a wider space for pedestrians. One can also see Drömarnas Kaj from the Hisingen side of the bridge, or, as you walk on the bridge you get shifting views of the city, and also of Drömmarnas Kaj. There are other bridges such as Älvsborgsbron, Tingstadstunneln (tunnel in the water) and Angeredsbron, yet Göta Älv Bron is the busiest bridge. But in its place, a new bridge is under construction because of safety issues. A Gothenburger says ‘it shakes when a group has a party’ and ‘one can hear the sound of the shake’. You notice that a new bridge is under construction because Göta Älv Bron will be dismantled soon! This is your time, to see the old bridge and new bridge, in functional condition and under construction, respectively. You wonder the lifespan of Göta Älv Bron could not complete a hundred years!

Drömmarnas Kaj is part of Gullbergsvass in central Gothenburg. In the 20th century, this area was dominated by traffic routes, freight handling, postal terminal, gasworks and rail activities. In 21st century, you will see the strips of its past.

As you walk past the bridge, you hit a track neither peopled nor a trace of activity. In the river, you notice a Thai restaurant, a party boat, and a houseboat without any signage. The houseboat is a discreet rehabilitation centre for substance abusers. Depending upon the need, the houseboat can be used for another activity. Past the boat, you are welcomed with a small traffic signal which might have served for road traffic or the train drivers. You will see the rail tracks still intact but neither a train nor a tram passes by. The rail-track is abandoned. Once upon a time, it may have served for ferrying goods unloaded from boats in the dock, and loaded into a train.

Past the traffic signal, you start to walk on road called Gullbergs Strandgata. Here, on to your left-hand-side is the River Göta and on to your right is a roadway and buildings. One of the striking buildings is the one topped by a pagoda, and aptly named Pagoden!  On this side you will notice buildings in progress and some in operational condition such as Pagoden and the offices of Traffikverket and Spårvagn.

As you walk, you will start to see boat after boat crying for usage, a boat under renovation, an anchored boat bobbing … along the cemented shore of the river. And, in the middle of the river is an islet. Between Göta Älv and Mårten Krakowgatan is Hultmans holme (holme in Swedeish). The islet has wharves and rusting ships and a trace of activity.

Many boats are small, some are medium-sized and few are yacht-like. Someone bought to fulfil his or her or their dream. This is Drömmarnas Kaj – Dreamers’ Quay.

A spot here is also used by the local government, Göteborgs Stad, to dump the snow collected from the city during peak winter season.

Dreamers’ Quay and its precincts are going through a change because in 2020s major changes are planned. The underground railway station of Västlänken is underway at Nils Ericsson Terminal, the highways E45 and E6 will see improvements. The whole area is slated to have a pleasant green feel. One also notices the remnants of ‘urban gas installations’, warehouses and factories like Swedish Match snusfabrik and the old gasworks at Gullbergskajen.

Dreamers’ Quay evokes the reality of a dream: fulfilled, partly-fulfilled and unfulfilled dreams. Indeed, one of the ultimate luxuries of a Gothenburger is to own a boat, or may be a yacht.

The dream is to have a boat, and live in it, now and then. Because the dream of owning a boat is not like dreaming for a dream job, dream house, dream car – the quayside assumes a romantic allure to it. You dream to own a boat, and you own it but can you keep it afloat?

The dreamer’s dream is to own a boat. The dream is achieved: a boat is owned. But owning the boat and maintaining it is another matter – definitely not a boat. The dream can get crushed, or sustained and Drömmarnas Kaj is all about walking into those dreams.

Many boats anchored at the quayside are either abandoned or seldom inhabited. You see boats in dilapidation, and another boat in need of salvaging.

Yet you see a young couple living the dream, even if it is as brief as a day or a week or a season. You see a couple in their old age living to catch dream before retiring from life. You will also see a typical Swedish singleton with a dog.

Dreaming is one thing, achieving the dream is another things, and sustaining the achieved dream is some other thing.

One should have a dream, try it out the dream, even though the dream gets crushed but one gets the satisfaction of a dream dreamed, and experiencing that dream so that one may not regret it: that is also reflected in Drömmarnas Kaj.

Drömmarns Kaj brings the visitor closer to the realities of a dream: a worthwhile walk will be towards the Dreamers’ Quay. 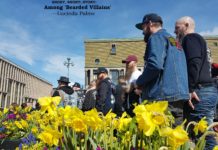 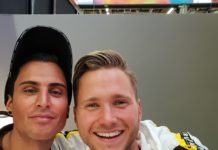